G is for Great Little Gardener 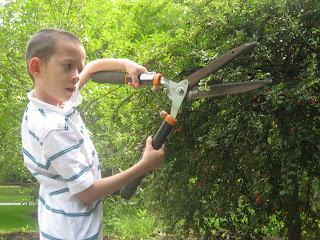 G is for Great Little Gardener

Ryan loves to help me in the garden.  But he doesn't like to do anything where he will get dirt on his hands.  This makes finding horticultural tasks that he enjoys  difficult.
Until one day he picked up the hedge trimmers.  I have to admit I was  a little nervous when he looked up at me with his gleaming brown eyes, sharp trimmers in hand and said, "Mom I'll trim the bushes for you!"
I imagined that either the bushes would end up with a buzz cut like his own head, or he would trim a little bit of himself. But maybe if I showed him how to use them, he could actually be of some help.

I didn't get much gardening done that day, instead I stood back and watched as he carefully chose which branches he wanted to lop off, some of which were too thick for him to cut through.  Together we got the bush done...and then he wanted to go inside.  But in his heart was now planted the love of the garden.

Have a gorgeous Saturday!

Posted by kjmckendry at 3:27 PM