In the Room Where it Happens 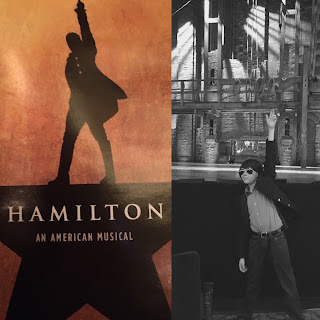 Since February, my husband Jesse and my 11 year old son Ryan, have been obsessed with the Broadway smash hit Hamilton: An American Musical by Lin-Manuel Miranda.  They listened to the music non-stop, until they knew every word in the over two hour long recording. At first my daughters (19 and 17) and I were slightly annoyed hearing it 24/7 until we stopped to listen to the story being told, then we were blown away.

Fast-forward to last Saturday, June 4th.  The day after my son’s 12th birthday.  The last day of our wonderful week-long kick off to summer exploring New York City.  The next day we were heading home to Cleveland.  My husband told us to dress nicely for a fancy lunch to celebrate Ryan’s birthday.  After a delicious sushi meal we walked back toward our hotel.

We headed up 46th street.  Jesse, holding Ryan’s hand, weaved his way through the gathering crowd and stopped at the line forming in front of the Richard Rodgers Theater.  The kids were a little confused.  Wondering why we’d stopped.

Jesse with his adorable, mischievous smile looked at the kids and exclaimed, “Confession time, here’s what I got...we’re seeing Hamilton.”

A smile spread across Ryan’s face.

The kids could hardly contain themselves.  It took all their strength to stay composed in line and not freak out.  They knew tickets to Hamilton were hard to get.  It’s not impossible to get tickets, but right now it’s ridiculously expensive- you can either see Hamilton or you can be financially responsible- not both.

There are 10 Things You Need to Know

Number 1.  The girls and I were seated in Box A.  Literally right beside the stage.   Ryan and Jesse were seated below us in the orchestra.  I sat closest to the stage because the view is blocked ever so slightly by the huge stage lights and I wanted the girls to have the full view.  But being able to see the actual tears drip down Alexander Hamilton’s face far and away made up for any missed view.


Number 2.  As soon as Aaron Burr (Leslie Odom Jr.) steps onto the stage, the entire theater explodes into applause and cheers, and the applause continues as each actor appears on stage for the first time.  I look at my girls who look as if they might faint from the anticipation.  We’re really doing this.

Number 3.  I wish I could slow down time.  To take in every detail.  I’m staring at the spotlighted actor in each scene.  But there is so much more.  My eyes are drawn away.  The ensemble dancers lift up young Alexander’s dead mother, not like a deceased body but like a pairs skater in an overhead pose.  I’m captivated.

As narrator of the story, Aaron Burr maintains an orchestrated distance.

Somewhere in the middle of the first act, Hamilton points his Revolutionary era musket directly at the three of us.  The emotion in Lin’s eyes is almost too much to hold his gaze.  We girls grab each other’s hands in awe.  We do the same when Lafayette interacts with us, and when George Washington looks our way, I know this is crazy but... it’s not Christopher Jackson looking at us, somehow it is George Washington.  We are no longer bystanders in the theater. We are transported 240 years and we, all of us in the theater, cry and laugh as one, we are now a part of the story too.

Number 5.  The Schuyler sisters were a favorite for the three of us, especially Angelica’s (Renee Elise Goldsberry) Satisfied.  Seeing the entire cast “rewind” for her flashback was like something out of a dream.

Number 6.   I almost feel like I’m on the field of battle when the canons reverberate right near us.  And when Lafayette leaps off the table during Guns and Ships and begins his rap... there are no words for this, the visual effect is more powerful than my words are capable of describing.

Number 7.  The crowd erupts at the end of Non Stop and from my vantage point, I turn to see the audience. For just a moment I feel as if I’m on stage too, and a chill runs through me.

Number 8.  I’m astonished by Lin-Manuel’s transformation into Hamilton.  He doesn’t seem like he’s acting when he breaks down and cries as Eliza hands him a letter telling him of his friend’s death.  He’s still crying as the scene changes and his next song begins.  He doesn’t have time to compose himself and he’s still wiping tears and trying to regroup halfway through the song.  Is he that amazing an actor, drawing on his own life experiences to make himself repeatedly break down, or is he becoming Alexander Hamilton? How does he do this 7 times a week?

Number 9.   The end is no secret but the power of seeing it dramatized is too much.  The theater goes black.  The girls and I are sobbing.  The crowd bursts into a standing ovation as the lights return.  The actors bow as one and walk off stage.  Daveed Diggs and Christopher Jackson look into our box for one final time and smile.  Thrilled, the girls wipe their tears, I leave mine.  I look down at Jesse and Ryan.  Lin points directly at Ryan as he walks off stage.  Ryan looks up at my husband, smiles and puts his small arm around him.

Number 10. I won’t ever forget the story of tonight.