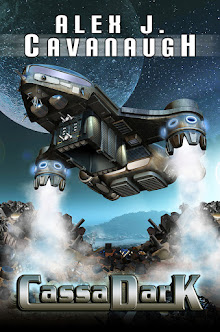 His world is unraveling…

Bassan’s father is stepping down from command. His best friend almost dies when Bassan freezes. Now, he’s being sent across the galaxy to speak at an important conference. Despite saving the eleven races years ago, he’s paralyzed by fear and doubt. Could things get any worse?

Once there, new acquaintance Zendar convinces Bassan to visit his planet for a humanitarian mission. Bassan’s special connection to ancient technology is the key to saving Zendar’s people. One problem though—it’s a prisoner planet.

On Ugar, he discovers things aren’t so straightforward. As each secret reveals itself, the situation grows more desperate. If he can’t find the right answers, he might die along with Zendar’s people. Can Bassan summon the courage to be a hero again? 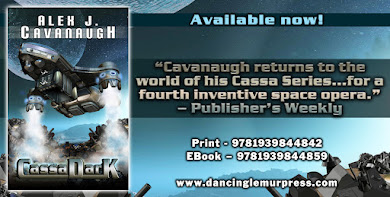 Kathy: Hi Alex! Great to have you here!

Alex: Thanks for having me!

K: I've known you "virtually" for a long time and it was a thrill and a joy to read your latest adventure in the Cassa world! I'd love to hear more about what went into this newest journey through space. So let's just get started:

K: In your Cassa series most of the books follow Byron, what made you choose to tell Bassan's story this time?

A: By the time I got to CassaStorm, Byron was now in his early sixties. (Cassans live to be 120, so he wasn’t quite as old as it sounds.) But since I kept jumping ahead twenty years in between books, I knew the next jump would place Byron too old for action and adventure. (Like having Harrison Ford do Indiana Jones right now!) An idea for an adventure for Bassan (Byron’s son) hit me and I decided that was the next logical step in the stories—move on to the next generation. I only jumped ahead fifteen years for this one, though…

K: I agree! I'm all for staying active late in life, but I don't really want to see an 80 year old Harrison Ford in an action movie! 😬😳 How much growth can an 80 year old experience throughout a story arc any way? The growth and progression of Bassan's character and how he learns to trust himself as well as those around him was one of the things I loved most about this book. Can you talk about how you crafted Bassan into a well-rounded character?

A: Sheer luck? Just kidding! Bassan was a bit shy as a child and always following his older friend’s lead, and I figured that carried over into adulthood. Add the fact that he feels his greatest achievement was saving the races when he was ten and it’s now fifteen years later. He’s aware that’s mostly what he’s known for. He doesn’t like change, but he wants his life to mean more. It fed into his insecurity. Dump on the concerns of choosing a life mate, of disappointing people, and fear of new things, and I think I gave him a lot of qualities many people deal with in real life.

K: Yes, you did! And I think there are so many people who have early success in something whether it's school, sports, or music and then all of a sudden as they age, they struggle with the fact that maybe they have already had their moment of greatness and wonder where to turn. I'm so glad Bassan learned to trust in the fact that his greatness was his courage to do the right thing and risk his own life to help others.

K: Let's talk a little bit about world building--the Cassa world is huge!! What is your process to keep all the details straight?

And how do you go about coming up with new species for your worlds? My favorite in this one was the xert!

A: I wish I could tell you I keep everything organized on a spreadsheet or something, but I really don’t. I do have the basics for each race and the planets encountered in the series written down, although when writing this, I had to refer to CassaStorm, the previous book, more than once. I guess I have lived with this world so long, it’s ingrained in me.

Glad you liked the xert! He was a last minute addition. I tend to focus so much on people that I forget critters. But on a planet with few people, those critters would be all over the place.

K: About how long does it take you to write a new book?

A: Depends on the book. This one took almost two years, because I’d taken a long, long break and was quite rusty once I began writing again. The first one was about a year. The next three took around two to four months, so that’s probably closer to my average.

K: Two to four months on average! That's awesome! I hope some day I can write that proficiently. What is coming next in the CassaWorld? Or are you planning something totally different?

A: I have no idea. I may have thrown everything at Byron’s family that I can. As for my standalone, outside of death, I can’t think of anything else to throw at that main character. Might have to come up with something new.

K: I can't wait to see what you conjure up! Which sci-fi books or movies have had the biggest influence on your writing?

A: I read a lot of Arthur C. Clarke, Alan Dean Foster, Robert L Heinlein, and Terry Brooks when I was younger. More recently, Timothy Zahn’s Star Wars books have been a big influence. (The man knows how to keep things brief and moving!) As for movies, of course Battlestar Galactica and Star Wars influenced me when I was younger, and the slew of new science fiction movies keep the ideas flowing.

K: Those are the giants of sci-fi!

As the Ninja captain of IWSG, I know you're super busy! Do you do speaking engagements, book fairs, or writers conferences? What do you feel has been the best way to get your book in front of readers?

A: I’m not much for in-person events. Most of what I’ve done in the past has been through my connections online and blogging. Times have changed, so we’ll see how well that does for this book. Thankfully my publisher does a lot of marketing and comic con appearances to make up for what I lack.

CassaDark may be the fourth in a series, but it can be read alone, especially as it follows a different character than the other three.

Thanks for letting me ramble, Kathy!

K: You're welcome! And yes, everyone go out and buy the book! It's a great read!

And here's a cool graphic of all of Alex's books, go read them all! 😀

Alex J. Cavanaugh works in web design and graphics, and he plays guitar in a Christian band. A fan of all things science fiction, his interests range from books and movies to music and games. Online he is known as Ninja Captain Alex and he’s the founder of the Insecure Writer’s Support Group.
http://alexjcavanaugh.com 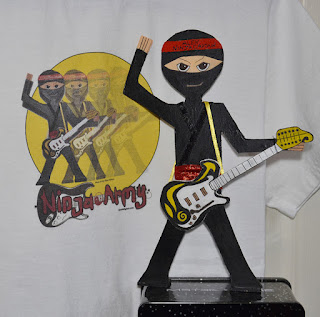 When I first started blogging over 12 years ago, Alex was there to be a voice of encouragement and support. He brought so many of us together, sponsoring fun contests, bloghops and finally creating the Insecure Writer's Support Group, now a site recognized as one of the top Writer's sites by Writer's Digest. Without Alex, I most likely would have quit blogging a very long time ago. Thanks Alex for creating this wonderful writing family!!! 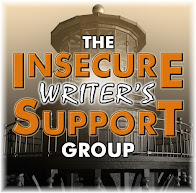 Purpose: To share and encourage. Writers can express doubts and concerns without fear of appearing foolish or weak. Those who have been through the fire can offer assistance and guidance. It’s a safe haven for insecure writers of all kinds!

Posting: The first Wednesday of every month is officially Insecure Writer’s Support Group day. Post your thoughts on your own blog. Talk about your doubts and the fears you have conquered. Discuss your struggles and triumphs. Offer a word of encouragement for others who are struggling. Visit others in the group and connect with your fellow writer - aim for a dozen new people each time - and return comments. This group is all about connecting!--from IWSG website
Find us on Twitter at @TheIWSG #IWSG
The awesome co-hosts for this month are: Joylene Nowell Butler,  Jemima Pett, Patricia Josephine, Louise - Fundy Blue, and Kim Lajevardi!
Question of the Month: Have any of your books been made into audio books? If so, what is the main challenge in producing an audiobook?
I haven't made my book into an audio book yet, though I am thinking about doing that eventually. So I welcome any suggestions or ideas on this topic.
My insecurity for this month is that I have a few library/bookstore talks coming up this spring and I'm a little nervous about them. I actually don't mind public speaking too much but in the past I have always spoken about my other career: the sport of figure skating. I've spent over thirty years teaching beginner to advanced skaters so I'm super comfortable speaking about it.  Talking about my memoir, One Year on Broadway seems like a much more daunting task.
Are you excited to read CassaDark? What are your tips on audiobook creation or speaking events?
Have a lovely April! We're finally seeing a little bit of sun here in Ohio!
Love,
Kathy :)
Posted by kjmckendry at 5:00 AM 24 comments: