Last time I told you how the Theater on Ice team that I coach was headed to Nationals, here's what happened...


If you've never been in, or to a skating competition, you might think the skaters just show up when it's their time to skate, skate for 4 minutes and then sit back, relax, and wait for the scores.  That's not quite how it works.  In reality the whole day is nerve wracking.  The team arrives about two hours before the scheduled skate time, because you never know for sure until you step on the ice, exactly what time you'll be skating.  They could be running late or early and you have to be prepared.

I got there even earlier partly out of nerves, partly because I wanted to be first to arrive as their coach, and I had to go check the team in.  Once the kids arrived at the rink, it was time to do their hair and makeup.  I got right to work braiding hair and making sure it was glued together with enough hairspray and gel so it wouldn't come apart even if a tornado hit them.  The team was nervous as they saw other competitors preparing to take the ice but we kept our focus on getting ready.

When everyone had their hair done, we headed to find a more secluded spot todo some warm ups and run through the program off ice.  We played our music and ran through the steps a number of times.  Everybody looked great.  And it was time to head to the locker room to put on costumes and skates.

When we got to our assigned locker room, the officials had put up a notice saying our skate was going to be 30 minutes later than we had planned.  That meant 30 minutes of waiting.  We'd already run through the program enough and I didn't want to wear the kids out but they all decided they wanted to run through it one more time.  So we did.  They looked great but afterward, I was afraid I was losing them.  One girl was having severe back pain and wasn't sure if she could even skate, another was having a boyfriend crisis at the rink, one was worried about the jump they had to perform, and another was suffering from  such swollen mosquito bitten feet that she couldn't put her skates on until the last minute.  The rest of the team sensed their depleted energy and I thought if I didn't change the mood fast we could be in trouble.  So I gathered them all around in a circle and I talked to them.

I wanted them to skate out on the ice, take their positions and look at each other and the crowd  and enjoy every single moment of the 4 minutes they had to skate with each other.

Their confidence grew and it was finally time to head to the locker room.

They skated out, took their positions, and waited for the music to start.  I held my breath!

If you'd like to watch, here is their program!

They did everything I had asked of them and more and it was a wonderful skate! There was one tiny little mishap but it didn't matter, they skated a beautiful program together and their faces lit up as they skated off the ice.

We didn't win. We didn't even medal.  But when we got our scores and saw that we had placed 9th out of a total of 16 teams, we all screamed and hollered like we'd won gold!  I'll never forget those moments and how proud I am of my team! :)

I had really wanted to post more this summer, but here it is already August and I've spent the whole summer having too much fun with my husband and kids!  But I figured with Jess and Alyss both starting college this fall, I'll have plenty of time to catch up on blogging when the house is empty.  :(

Today's IWSG though was the perfect day to take a moment and reflect on things ahead. 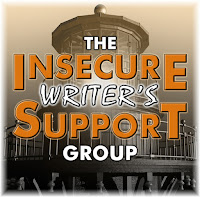 The Insecure Writer's Support Group is a wonderful place where writer's get together and talk about their fears, insecurities, and successes.  It was the brain child of Alex J Cavanaugh in order for us to give encouragement to one another on this long and sometimes lonely journey of writing.  It has been truly inspiring to be a member.  Check us out and join here.

Today, while I have many insecurities as a writer like anxiously waiting to hear back from a publisher and slogging through the edits/rewrites of my novel, I also have some super exciting news in my real world job.

Some of you may know that I've been a figure skating coach for over 26 years.  In that time I've enjoyed teaching many children and adults the intricacies of my sport.  I love nothing more than the time I spend on the ice with each student, learning about their lives and what makes them tick then guiding them to do things they never thought they could and seeing their eyes light up when they succeed.

While I try to teach my students to strive for excellence and precision, I've never been a big fan of skating competitions.  Yes, it is fun to win and I guess sometimes students need the competition to push them to greater heights, but personally I think when we put the focus on "winning" we lose sight of all we have learned along the way.  It's the day to day practice where the learning really happens, where even after falling twenty times you still have to get back up, analyze the mistakes and try something different.  Winning on a particular day isn't really what makes the champion, it's the passion and determination that is brought each day to practice.

Why am I telling you this?

Because despite my feelings about competitions, next Saturday August 13, I'm taking my team of Theater on Ice skaters to compete in the National Showcase Championships for Theatrical Skating!  I'm so excited I can hardly stand it!  We'll be competing against 15 other teams from all around the country and a Canadian team.

I'm already super proud of the kids on my team.  They have really come together and gelled as a team.  In fact, they have so much fun together that sometimes it looks like we're having more of a party on the ice than working hard.  Through it all, they've learned to support one another, forget differences, work together artistically, and deal with injuries.

It's been a great year!

I'd like to say (and really mean it) that I don't care at all what place we get, but when I search myself I know that of course I would prefer winning.  But whatever happens next Saturday, I'll be proud of these fabulous kids and the passion and determination they bring with them every practice.

My biggest hope is that they all take the time to look around and enjoy the moment.  I know I'll be enjoying having the privilege to share this experience with them as much as I've enjoyed the whole year as their coach.

I hope you are all having a wonderful summer!