We had the wonderful opportunity to go to the Invited Dress Rehearsal for the musical Hadestown on Wednesday.

Being in a Broadway theatre again after a year and a half was magical. Bursting with energy, the crowd gave an extended standing ovation as soon as the cast walked on stage. It was incredible to be there. 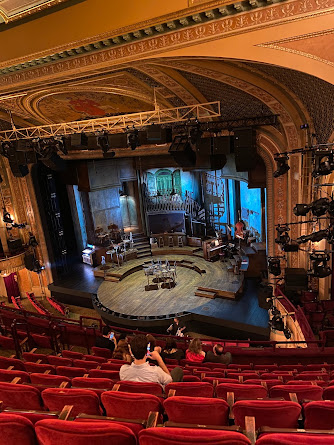 Today, I'm over at C. Lee McKenzie's blog, talking about One Year on Broadway, so stop over and say "Hi"

Have a wonderful Labor Day!

Email ThisBlogThis!Share to TwitterShare to FacebookShare to Pinterest
Labels: Broadway, Broadway is Back, One Year On Broadway

Success...How do you know if you have it? #IWSG

It's September 1st and it's time for another IWSG post! The Insecure Writer's Support Group was created by Alex J. Cavanaugh (who is giving my book a shout out today! Thanks Alex!) as a way for all of us writers to share our fears, anxieties, and successes in a safe and non-judgmental space. Over the years, I have found this group to be one of the most supportive and welcoming places, boosting my confidence when needed and teaching me several great tips of the trade.
This month our awesome hosts are: Rebecca Douglass, T. Powell Coltrin @Journaling Woman, Natalie Aguirre, Karen Lynn, C. Lee McKenzie.
And don't forget, today is the deadline to submit your Sweet Romance for the IWSG Anthology contest!
September Question:

How do you define success as a writer? Is it holding your book in your hand? Having a short story published? Making a certain amount of income from your writing?

There are certain accomplishments that pretty much everyone would agree are signs of being successful. Having a book on the "Best Sellers" list, winning an Olympic gold medal, or making lots of money. Most people never accomplish any of those things. If those top accolades were the only way to be successful, almost no one would be.

To be successful as an author, do you need to sell a million or more copies? Maybe some authors measure their success by books sold, but that seems too high a bar for most of us.

According to Google, Amazon alone offers over 48 million books! Unless you're already a best selling author it's hard to stand out in a crowd that enormous, even if your work is as good as Stephen King's or Maya Angelou's. Hundreds of thousands of people might love your work, if only they knew it existed.

I would LOVE for my book to become a best-seller. But I'm also realistic. Just like my figure skating students who dream of the Olympics, I know that there is only a minuscule chance that I make it to the top. And that's okay.

Maybe my own definition of success as a writer will evolve over time. At this moment however, in the middle of releasing my debut book, One Year on Broadway, I feel like a success.

I made it through the entire multi-year process of writing, re-writing, editing, arranging an outside editor, and finding a cover artist. Then I faced a roadblock, the kind that closes all six lanes of traffic, which threatened the entire project. I wondered if I should give up but I chose to forge ahead. Finally, I made it to release day. To me, that is success. Whether or not I sell fifty copies or a million, I'm happy with the fact that I told the story I wanted to tell and now it is out in the world. I have a feeling, though that if Stephen King only sold fifty copies of his next book, he might consider that one a failure.

I would love to hear how you define success as a writer, have you made it yet?
Did you send in an entry to the Anthology contest?

And lastly, in honor of the release of One Year on Broadway last week, I wanted to share with you a short clip of Once on This Island from Broadway so you can see for yourself just how special this musical was.

Have a wonderful rest of your week!