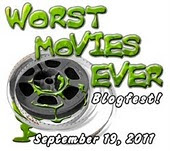 Today I'm participating in Alex J Cavanaugh's the Worst Movies Ever Blogfest!  It was fun to think of all the movies I'd seen.  It was actually hard to come up with 10 though.  I think my brain selectively forgot most of the bad ones I'd seen.  I had to look up our old Netflix ratings to see which movies I had given 1 star to.

Here are my 10 worst movies:

10.  House of Flying Daggers- I think the writers of this one forgot they were supposed to write a story.  The scenery was beautiful but that's all it had.

9.  Avatar- I'm sorry I know lots of people loved this, but I expected more than fancy graphics.

8.  The Little Shop of Horrors-  A giant human eating plant and  musical?!

7.  Mega Mind- Just because Will Ferrell is in  a movie doesn't mean it will be funny.

6.  Diary of a Wimpy Kid- Parents have enough troubles, do we really want movies to advocate bad behavior in kids?

5.  2 Fast 2 Furious- I didn't really think the first one was that great, but the sequel crashed and burned.

4.  Knocked Up- Embarrassing to watch, not even funny

3.  Date Night- I love Tina Fey and Steve Carell so I assumed I was going to be crying with laughter. But, instead of being clever it tried to get cheap laughs with far too many sexual references.  It could have been a good movie but it was simply disappointing.

2.  Sweeny Todd- I guess I'm just not a fan of chopping people up and turning them into pies.  I actually had to stop watching because I thought I was going to be sick.

Johnny Mnemonic- There isn't even anything that needs to be said about this one!


Check out Alex's blog to find all the other entries.

What are the worst movies you've ever seen?  Is there a pattern to movies you don't like?

Posted by kjmckendry at 8:20 AM