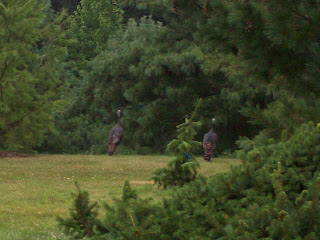 Turkey....oh so juicy and delicious with mashed potatoes and gravy.  That is until I saw them up close and personal.  My kids and I were strolling through the University of Wisconsin-Madison Arboretum enjoying the many species of flora.  All of a sudden we heard a rustle, then something ran out of the bushes like a velociraptor hunting prey.  My daughter yelled, "Turkey", and the chase was on.  The four of us tried to sneak up on the large bird, but kids aren't the quietest of species.  It ran out into the open this time and we just took off after it.  It was quickly out of range.  I never imagined that turkeys could run so fast!  We again tried the slow sneaky approach, which was a good thing because somehow, now there were 5 turkeys. We hid behind the bushes.  My son thought he was a real spy as he looked through the binoculars we had brought with us.  You wouldn't think that a bird with such a tiny head has much of a brain, but every time we inched closer, they sensed it and scattered.  Finally, we decided to hide behind a group of pines and just watch them.  We couldn't believe what happened next.  Another group of about 5 turkeys appeared and both groups started squabbling.  It was like family members at a reunion.  The noise level increased, until the two groups faced off around a tree and a turkey fight began.  They were jumping and squawking and chasing each other.  Just as quickly as it had started they all ran off and it was quiet again.  The kids and I looked at each other amazed. I looked around and wondered where the heck we were.  Great we were lost....thank goodness I had tucked the Garmin in my backpack.
Thanksgiving will never be the same!

Kathy
Posted by kjmckendry at 10:00 AM