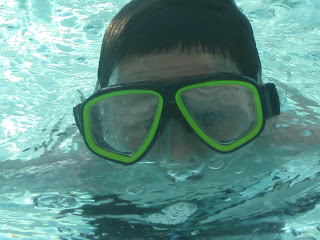 My son is a skinny little guy.  He's one of those kids that doesn't even think about eating until he's famished.  He would rather do just about anything other than eat.  When we do get him to the table he takes a bite of food then runs off to get a Lego piece, takes a few laps around the table, and finally returns to his food only when I've told him to sit down.  (Oddly enough this trait must run in the family, because my little brother used to do the exact same thing!)  We tell him he has to eat to be big and strong but he just isn't interested.

But a couple of weeks ago he went swimming at the gym with his dad.  He put on his swimsuit from last summer.  It hung loosely around his protruding hips.  I had to pin it tighter with a safety pin so it wouldn't fall to his ankles.  "Oh great, I shrunk!" He said with frustration.  Then we both laughed at the predicament.  I didn't tell him that the elastic had lost its effectiveness.

He came home after swimming and the first thing he wanted to do was eat!
And he ate and ate and ate like the Hungry Caterpillar.

He's swimming almost every night now and though it's still hard to get him to sit down at dinner and he occasionally runs around the table, he is eating lots of food.  The shrinking has finally reversed!  Oh and we did buy him a new swimsuit.


Hope you have a great weekend!