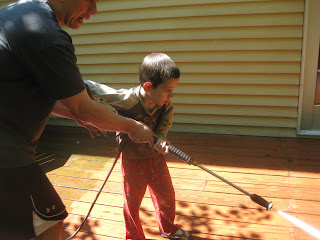 If I had told the kids that we were going to spend Sunday power washing the deck and painting the outdoor furniture, they probably would have wanted to migrate to a friends house for the day.  So I didn't tell them.  Instead, my husband and I got to work.  Upon seeing Dad with a cool new machine, Ryan quickly decided to come see what was happening. He stood watching the strong stream of water blast the dirt away. Jesse handed him the sprayer. His eyes lit up and I could see the wheels of his imagination turn.  He transformed into a space captain blasting bad guys with his super water cannon.
The girls made their way out as well.  They each grabbed a paint brush (I brought out extras just in case), and wanted to help me paint.  We talked while we worked on one chair.  We quickly finished it and moved onto the next one.  Ryan wanted to try painting too so Jessica and Alyssa took turns with the power washer and Ryan picked up a brush.  I figured he would tire of it easily, but he helped me finish two chairs.
With their help, we were done sooner than expected. That left time for us to take the kids out bowling....where they worked together to beat us and won an ice cream cone as well. 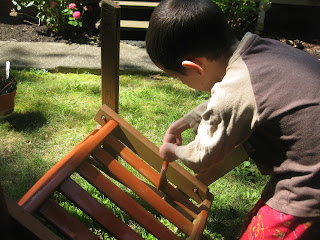 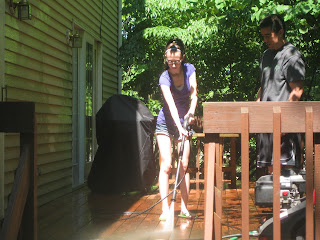 Kathy
Posted by kjmckendry at 11:50 AM

Email ThisBlogThis!Share to TwitterShare to FacebookShare to Pinterest
Labels: Kids