My daughter, Alyssa, and I love to cook together and we love going to cooking classes.  This week we  decided to bring my husband along with us to learn how to make homemade pasta.  We weren't sure how he would do in the kitchen since he's not really a regular around the stove.  But he made us proud.
It was great fun!  We each had a little work station and prepared our own dough, which was surprisingly simple to make, just eggs flour and salt with a little liquid (milk or other flavoring) to moisten it.  He learned how to kneed and roll out dough, which will come in handy for Thanksgiving pies!

He was put in charge of cooking the lasagna noodles, then Alyssa and I had to grab them out of an ice bath and dry them off with a towel before handing them off to the next couple who layered them in the pan.  It was quite an assembly line.  I can see why Italians have such big families.  They need all the help in the kitchen to make great pasta!

It was delicious.  The best pasta I have ever eaten.  I don't know how pasta from a box will ever be good enough now.  We will have to try making it at home as a family project.  Should be interesting.

Here is Part II of Sally's post about her grandma Harriet.

Harriet was a great seamstress using a Singer treadle sewing machine making both her eldest daughter’s wedding dress in the 1950’s.  She would bake cakes and biscuits and cook everyday of her life, roast dinners on Sundays, cold meat and mash on Monday, then various meals during the week, including rabbit pies and always served with a dessert.

Harriet was a very hard worker and worked for the local farmer from spring to autumn hop training, hop picking, fruit picking and potato picking.  She would also go primrose picking (taking myself with her) in the woods which were then bundled up into posies and taken to the next train and put on the train and sent to Convent Garden market in London.

She loved a social life and would attend the Darby and Joan Club (a social club for older members), the Women’s Institute, known as the W.I. and Whist Drives, (Group Games/Card Games) a social gathering where whist is played; the winners of each hand move to different tables to play the losers of the previous hand Collins English Dictionary), and Bingo during the evenings in the week.

On every Sunday evening she would provide a cold supper for her brother and sister-in-law (Bert and Dorothy) who would visit their house where they would play cards and socialise together.

Harriet wasn’t a very tall lady but quite a feisty one.  She would have rows with her neighbour over some disagreement.  Fred and Hetty could go days and weeks without actually talking to each other because they’d had a disagreement but nobody could deny they loved each other deeply.

In her 80’s she suffered a heart attack and after recovering from those began to display the first symptoms of Alzheimer’s.   Her last move was to a lovely facility with people who could look after her 24 hours a day where she spent the last four or five years of her life.  Her family visited her as much as we could and we took the new generations to meet her as well.

Harriet died in her 93rd year having lived through two World Wars and saw many inventions, cars, televisions and telephones.  Even with all these inventions she never had a telephone in her house and didn’t possess a washing machine.

I spent a lot of time with my grandmother and loved every minute of it.

Thanks so much, Sally, for sharing your grandmother's history. 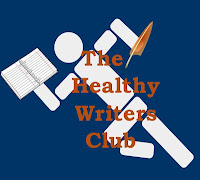 I have one more thing today.  As part of the Healthy Writers Club, hosted by Shallee McArthur just a quick update on my success at getting out of my chair this week.

Since the weather was great, on Wednesday my son and I went outside and played baseball together.  We had lots of fun running around in the leaves.

I also started learning the new set of moves, (they are actually called "Moves", I know not the most creative term!), for my next skating test.  Yay!

Have a great weekend everyone!

And don't forget next Thursday is the next Knights of MicroFiction.  The prompt is:  In 300 words or less write a scene where the main character realizes he/she is thankful for something.  Include the words "turkey" and "Mayflower" (this could be May flowers too or other creative variations).