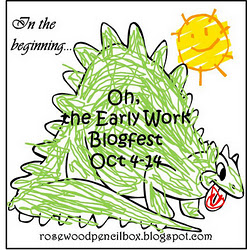 Julie over at Rosewood Pencil Box is hosting a great blogfest called Oh, the  Early Works.  The idea is to hear what other bloggers wrote as their first works and to be able to laugh/rejoice over the memories of them.  It was supposed to go until Oct 14th but it has been extended to Oct 28th.  So hop on over and join in the fun.

I can't remember when I didn't love to write.  I know I started out with some pretty cheesy poetry, but luckily, I don't remember any of them.  The first story I really remember was one I wrote in 5th grade. It was about this girl who wore big bulky sweaters to school.  Unfortunately, the sweaters always had giant lint balls hanging off them and all the kids made fun of her. (You can probably guess what kind of clothes I must have worn to 5th grade!)  Anyway she ran into the bathroom crying and tried to comb the lint off of her sweater.  She kept combing and combing until a giant lint ball formed that rolled around and ate the whole school! 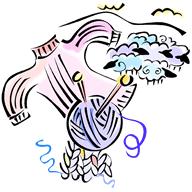 The next story, my mom and I wrote together and we had a blast.  I still remember sitting at the table laughing so hard we cried as we thought of new scenes.  This one was about a grandma and her granddaughter.  They met up with some strange unfriendly alien creatures that looked like walking pieces of bacon.  The grandma had  an extra special shiny belt buckle that shot out laser beams as the sun hit it and blinded the bacon people.  Somehow they all became friends and had a picnic of bacon lettuce and tomato sandwiches!  Yikes I guess I had a crazy imagination....maybe I still do. 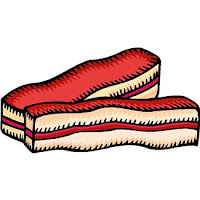 What were your earliest works?  Check out Julie's site to see what odd stuff other bloggers wrote about as kids.


P.S. We rode the ferry across Puget Sound today.  It was beautiful!
Posted by kjmckendry at 1:18 AM