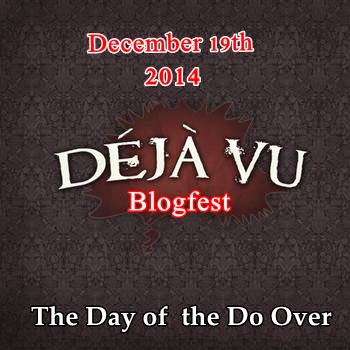 I'm participating in DL Hammons Deja Vu Blogfest today.  The idea is to repost a favorite older post from this year that you feel didn't get quite the viewing you'd hoped for.

I thought, hey, "that will be easy," then I started looking at my old posts.  Yikes, what a decision.  Not that they were so amazing I thought they all needed reposting, I wish.  I was a little underwhelmed and I wasn't sure any of them actually deserved being reborn.  Finally, I found one.  It's short and sweet and I thought it exemplified a kind of Christmas-time spirit, so here goes:


Yesterday, I was talking with my 10 year old son about my YA Fantasy novel (in editing phase) as I drove him to his guitar lesson.  He’s an avid reader of YA books so I respect his literary opinion. I explained some of the problems I was having with it.  First, he told me that a few of my ideas were a little too cliche so I might want to change it up a bit. Then he went on to give me his input on the weaponry my characters should be using, one of his favorite aspects of any story.

After a while he thoughtfully added, “Your main characters shouldn’t have magical powers.”

“Why?” I asked, sneaking a glance at him in the back seat.

“Because they shouldn’t have to use magic to be special and save the world.  Anyone can do it.  Everyone is special just by being themselves.”

Wow, I thought, and mentally prayed that he would always be himself.

Hope you enjoyed my Deja Vu post and I hope you all have a wonderful holiday season!

Show the world how special you are by being yourself!

Posted by kjmckendry at 6:00 AM