I have a friend at work who is trying to improve his diet. He knows that I'm kind of a health food nut, so he asked me if I had any suggestions.  He already knew that he should be eating mostly fruits and veggies, but it was hard for him to come up with interesting ways to eat them.
I love yogurt and I'm a firm believer that ever since I started ingesting massive quantities, I've been a lot healthier.  I suggested he add more yogurt to his meals, but I wasn't convinced that he would.  I decided to bring him a sample dish to show him how yummy yogurt could be.  I brought  in a large plastic container of my Yogurt Apple Salad, a spoon, and a bowl.  He gobbled up his bowlful and said he would rather have that than dessert.  Yeah! I left him the rest of the container. I was thrilled that he enjoyed it. I know that my salad alone won't make the world healthier place, but I was happy to have given him a healthy and tasty option.  The next day I came in to work and he had finished the last spoonfuls, told everyone else about it, and asked for the recipe!
So here it is: 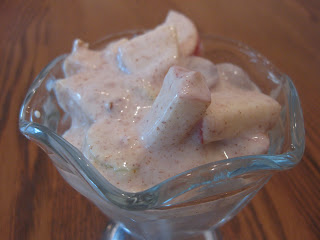 1-2 apples chopped (peeling is optional, I keep the peel on because it's good for ya!)
1 stick celery chopped
1 teaspoon cinnamon
1 cup chopped grapes
About 2 cups French Vanilla yogurt (I use Stonyfield Farms whole milk variety)
chopped pecans-optional
About 1 T of honey or to taste

Simply mix the apples, grapes, and nuts(if using) in a bowl.  Mix in the yogurt to thoroughly cover all the ingredients.  Add the cinnamon and honey.  Mix and serve and enjoy!  Store refrigerated.

Kathy
Posted by kjmckendry at 4:04 PM